In 2014, the Information & Strategy Office of the Fukuoka Asian Urban Research Center published “Fukuoka Growth 2013-2014” which indicates the growth potential of Fukuoka City with data.
In 2016, we are here to indicate the growth state of Fukuoka City that is steadily moving forward, again with data. 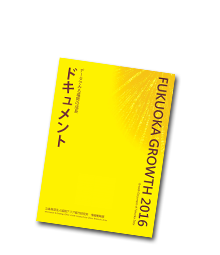